The Lake Superior Community Partnership Foundation has renamed the Midwest Skills Development Center the Gary W. Erickson Skills Center in recognition of his contributions to the training programs it provides.

“So many people worked hard, with amazing collaboration, to make this program a success,” Erickson, the Upper Peninsula Power Company’s President, said. “I’m humbled by this incredible honor.”

Foundation President Michael Skytta said the foundation was pleased to be able to recognize Erickson’s efforts in this fashion.

“Gary is deserving of this recognition, because he had the vision to develop the training center,” Skytta said. “He facilitated a partnership between utility companies, higher education and the foundation that will be a model from which we can build into the future.”

The Lake Superior Community Partnership Foundation, a 501(c)(3) corporation established in 2000, has a primary mission to promote and advance economic and workforce development in the Upper Peninsula.

The foundation created the Midwest Skills Development Center at the former KI Sawyer Air Force Base to offer vocational training and technical diploma programs to meet current and future workforce needs of utility companies. Erickson, who served as the Foundation president for four years, was the mastermind of the line technician school concept.

“Other schools in Michigan and Wisconsin had waiting lists for admission, but utility companies have a demand that exceeds the supply of qualified employees,” Erickson said. “It made sense to train our future employees here, and keep them here.”

Erickson also served as Chairman of the Development Center’s Line School Advisory Board since its inception.

“Gary both contributed and sought resources for the line school program,” said Amy Clickner,
LSCP Executive Director. “He’s been the spokesperson for the program, as well as a liaison between
the school and the Department of Labor and Economic Growth.”

Secretary of the Foundation Board, Mary Tavernini, proposed the naming, which the executive board
supported unanimously.

“His leadership and contribution needed to receive the proper recognition,” Tavernini said.
“A ‘thank you’ and a plaque wouldn’t reflect the contributions he’s made to the program.” 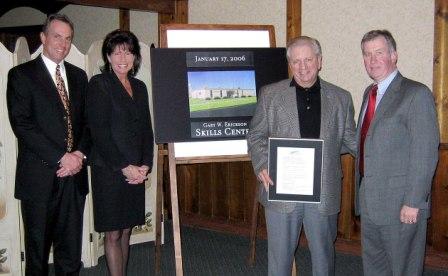